Acceptable Biological Catch (ABC) – The amount of a species of fish that biologists determine can be harvested by fishermen in a calendar year without harming the health of the biomass of that species or the ecosystem.  The Wild Alaska Pollock quota (see Total Allowable Catch) is always set at or below the ABC.

American Fisheries Act of 1998 – A law that among other things, established sector allocations in the Bering Sea Wild Alaska Pollock fishery between catcher processors, vessels delivering to shorebased processors and vessels delivering to mothership processors.  It also allowed the formation of cooperatives in those sectors, thereby ending the race for fish and enabling processors to dramatically increase the amount of food recovered from each ton of fish.

Bering Sea – The northernmost part of the Pacific Ocean separating the continents of Asia and North America.  It is comprised of a deep-water basin, which rises through a narrow slope into the shallower water above the continental shelves along the Russian and Alaskan coasts.  Approximately ninety percent of U.S. Wild Alaska Pollock harvests are from the Bering Sea. 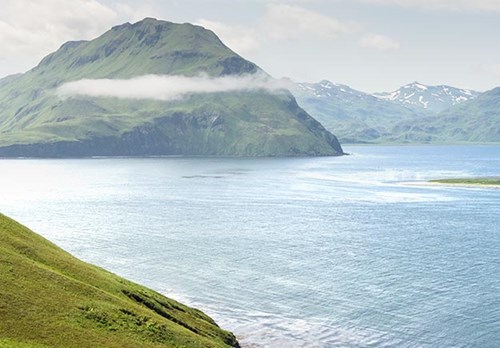 Bycatch – A fish or other marine creature caught incidentally during commercial fishing for a different species.  The bycatch rates in the Wild Alaska Pollock fisheries are among the lowest of any commercial fishery.

Catcher Processor – A large vessel that both catches and processes the catch onboard, including filleting, surimi production and freezing.

Community Development Quotas – A percentage of the Bering Sea Total Allowable Catch of Alaska Pollock that is set aside for rural western Alaska villages to provide economic and social benefits for their residents.

Fillet Blocks – Fillets frozen into 16.5 lb blocks of exact dimensions that are eventually further processed by cutting into portions that are then coated with sauces, breaded, or battered.

Frozen at Sea – Fish harvested at sea and then filleted and frozen within hours of catch.

Gulf of Alaska – The part of the Northern Pacific Ocean that extends outward along the southern coast of Alaska, from Southeast Alaska to the beginning of the Aleutian Islands.  Approximately ten percent of U.S. Wild Alaska Pollock harvests are from the Gulf of Alaska.

Gadus chalcogrammus – The Alaska pollock or walleye pollock (Gadus chalcogrammus) is a marine fish species of the cod family Gadidae. It is a semipelagic schooling fish widely distributed in the North Pacific with largest concentrations found in the eastern Bering Sea. Formerly known as Theragra chalcogramma.

Gulf of Alaska – The part of the Northern Pacific Ocean that extends outward along the southern coast of Alaska, from Southeast Alaska to the beginning of the Aleutian Islands.  Approximately ten percent of U.S. Wild Alaska Pollock harvests are from the Gulf of Alaska.

Marine Stewardship Council (MSC) – An international third-party certification program for wild-capture fisheries certifies fisheries against established standards, thereby recognizing efforts to protect oceans and safeguard seafood supplies for the future.   Both the Bering Sea and Gulf of Alaska Wild Alaska Pollock fisheries have been certified and re-certified by the MSC.

Midwater Trawler – A fishing vessel that tows a conical-shaped trawl net in the water column above the ocean floor.

Mothership Processor - A large vessel that receives fish from catcher vessels at sea and processes the fish on board.

Once Frozen Fillets – A fillet that is produced into either IQF fillets or fillet blocks and then frozen and not thawed until it reaches the final consumer.

Responsible Fisheries Management (RFM) – A third-party certification program (similar to MSC)  for Alaskan wild-capture fisheries,,  Both the Bering Sea and Gulf of Alaska Wild Alaska Pollock fisheries have been certified and re-certified by the RFM.

Shore-based Processor – A processor located on shore that receives fish from catcher vessels.

Surimi Seafood – High quality surimi is made from Wild Alaska Pollock by mincing and washing the flesh to remove everything but the fish protein.  Manufacturers of surimi seafood then add natural flavorings and ingredients to produce a wide array of finished surimi seafood products.

Sustainability – Sustainable fishing means leaving enough fish in the ocean, respecting habitats and the ecosystem and ensuring people who depend on fishing can maintain their livelihoods.

Total Allowable Catch (TAC) - The actual annual catch limits in the Bering Sea and Gulf of Alaska that are set by the North Pacific Fishery Management Council after the biologists determine the Acceptable Bological Catch. The TACs are always set at or below the ABCs.

Trawler – A fishing boat that catches fish using the towing method by dragging a conical net through the water or along the bottom.

Twice-Frozen – The fish is caught at sea, headed and gutted, then frozen.  The fish is then shipped to a plant for re-processing and frozen a second time.